Ascope: Land of the Rising Sun 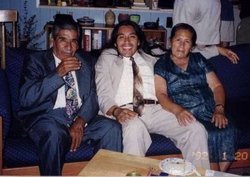 César with Papá Fermín (19XX – 20XX) and Mamita Ysidora (19XX – 2010)
Ascope is a province in La Libertad, a region in the northwestern part of Peru. Bordered by the major city of Trujillo to the south, the province of Cajamarca to the north, the Otuzco and Gran Chimú provinces to the east, and the Pacific Ocean to the west. This is where Clemente Cesar Villalobos L. first saw the light of day on November 3, 1960, in his family's small shack, which stood in the shade of a guanabana tree.

Baby Clemente, named after his paternal grandfather, was the second of thirteen children born to Fermín Villalobos, a farmer, and his wife, "Mamá" Ysidora. 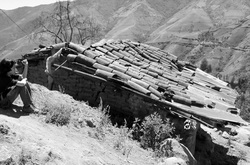 Clemente – Cesar, as he soon came to be called – would know great love within this tiny house with the dirt floors, which never had enough food on the table to calm the hunger pangs in the stomachs of the little ones. Five of Ysidora’s children died at young ages from problems related to malnutrition. The rest of the young children were sent out – Cesar included – to work at odd jobs to earn money for the family. Cesar’s early life in the Andes, with its dire poverty, but also its' sheltering love and the startling beauty of the nature that surrounded him, would become the inspiration for his music – an art that was totally self-taught.

Cesar wrote the song "Pueblo Andino" as a tribute to his hometown of Ascope.